osu! is a rhythm game primarily developed, published and created by Dean "peppy" Herbert. Originally released for Microsoft Windows on September 16, 2007, the game has also been ported to macOS, Linux, Android and iOS. Its gameplay is inspired by titles such as Osu! Tatakae! Ouendan, Taiko no Tatsujin, Happy Feet (video game), Beatmania IIDX,[3] Elite Beat Agents, O2Jam, StepMania, and DJMax. 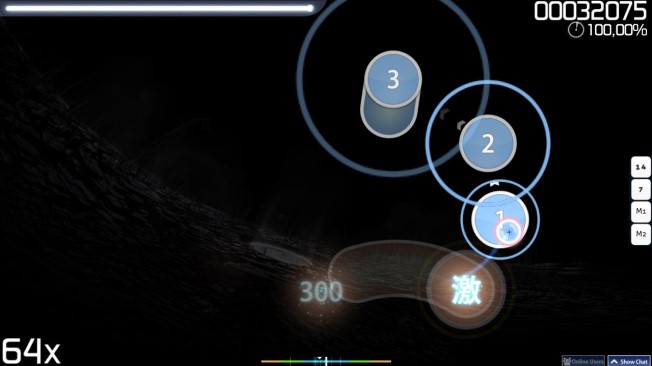 There are four official game modes: "osu!" (unofficially called osu!standard), "osu!taiko", "osu!catch" (formerly "osu!ctb"), and "osu!mania". A level in any of these modes is called a "beatmap". In osu!standard, beatmaps consist of three items – hit circles, sliders, and spinners. These items are collectively known as "hit objects", and are arranged in different positions on the screen and in different points of time. Taiko beatmaps have drumbeats and spinners. Catch beatmaps have fruits and spinners, which are arranged in a horizontal manner.