Officially the 3rd series release in the Super Mario series, Super Mario 3 is an NES and Famicom action-adventure game released first in Japan in 1988 and two years later in North America.

A special graphics machine, the Character Generator Computer Aided Design, was used to generate all the titular characters and shapes in Super Mario Bros 3. These shapes are assigned numbers which are then accessed by the game code.  The game uses the 2D side view that was used in previous instalments. A custom Memory Management Controller enhances the NES capabilities, allowing for animated tiles, diagonal scrolling and a scan line timer to split the screen.

In this release, Mario and Luigi can run and jump, slide down gradients, climb vines and pick up special blocks and throw them. Mario also has the ability of ‘power-ups.’ There are 8 kingdoms or worlds each with distinct visual themes and features and a player navigates these through the main world map and a 2D playfield. A player needs to defeat Koopaling bosses before progressing to the 8th world, where the player battles the main boss, Bowser. Multiplayer mode can be enabled to control the two characters in stages. The ‘super leaf’ and ‘Tanooki Suit’ are introduced in this instalment. The Tanooki allows Mario to turn into stone periodically, avoiding enemies. Jumping while in the Tanooki produces a ground pound, which annihilates enemies.

For Super Mario Bros 3 for NES:

Users have stated that the original Mario 3 on Famicom has an aspect of simplicity which allowed users to focus more on achieving gameplay than the underlying tasks.  The newer games are slower an dragged out, and for those holding onto the nostalgia of playing the initial runs, repeating levels and extra collectables which hold no other value really remove the fun from the game. Keeping to the linear scripts helps the older games retain their originality.

For $9.99, you can unlock the entire game and all its features. If you uninstall the game, you can do a restore without paying out another 10 bucks.

The game still offers a mix of nostalgic goodness if you’re willing to overlook some of the cons of the newer releases. 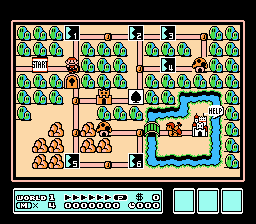